And now for something completely different ..

A lot of German food blogs are posting about poppy seeds this month. This is mainly due to a German cooking event with poppy seeds as the star of the dish. Mel from Pimpi-Mel-la is hosting Zorra's LXXX - Papaver event and I'm glad this ingredient gets a little more attention, since it is not only super yummy, makes you sound hip and cool (Oh dear, I haven't had my daily intake of opium poppy today ...), but is also very healthy. It is a super rich source for calcium and B-vitamins. But, and this may be to your dissappointment, the poppy seeds are nearly free of opiates.
In Eastern Europe, Germany, and Austria it is a cherished ingredient for cakes. But rarely used in savoury dishes. So instead of baking I turned to cooking, or rather, since the weather is hot and summer-ish towards making a salad.
At first we need the poppy-seed dressing. The recipe is based on Kathy's dressing on Healthy Happy Life. However, I replaced the apple cider and maple sirup with apple balsamico and instead of whole poppy seeds I used steamed and ground poppy seeds (this is because I'm stupid; I thought I had a package of poppy seeds in my cupboard but it was this steamed and ground one and it was too late to go shopping); therefore my dressing has a much darker colour than Kathy's. But it is equally yummy
These are the ingredients: 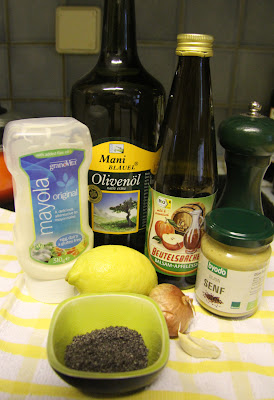 and if you whisk everything vigorously together you will get a nice dressing: 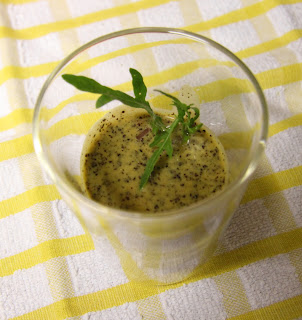 Since I had leftover couscous I added some colour to it (pomegranate, rucola, yellow bell pepper, and peanuts).

Before we turn to the salad I think this it is a good opportunity to explain how a pomegranate is opened properly without leaving a mess in the kitchen and on your clothes. I first learned this from Pete's blog and ever used this method since. But there is also a youtube video of it (well, what's not on youtube?).
At first take a good look at your pomegranate; because of this fruit we have a winter season - or so the ancient Greeks said. When Persephone was 'kidnapped' by Hades she ate 6 kernels of pomegranates and whenever you eat a fruit in the otherworld you can't go back. Since she only ate 6 kernels she had to stay with her husband Hades for 6 months and for 6 months she stays with her mother Demeter. Demeter is so happy for having her daughter back that she really goes into spring mood and therefore we have a warm season until she goes back to Hades. 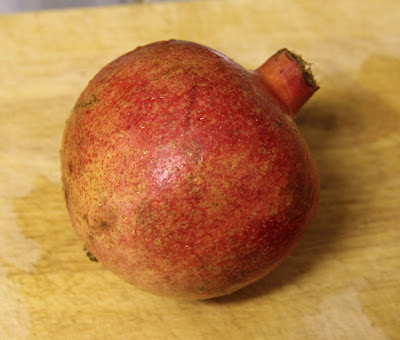 Now that you have properly appreciated the fruit, cut off with a sharp knife the top and lower part of it, like this: 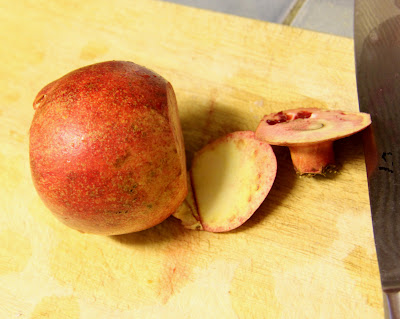 With a sharp knife cut the outer layer carefully, so that it looks quartered. Don't cut too deep or you will cut into the seeds which you don't want. 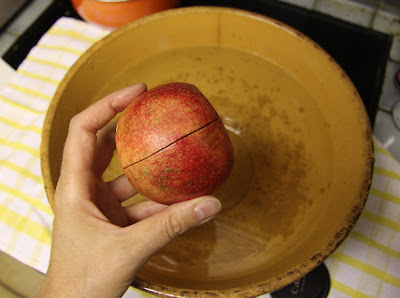 Now fill up a big bowl with cold water and break the pomegranate in quarters (below the water): 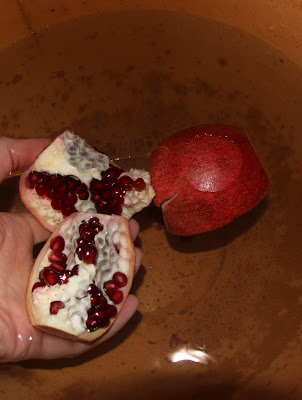 Gently loosen the seeds (still under water); the inner white skin will float on top and the heavier seeds will sink to the ground of your bowl. 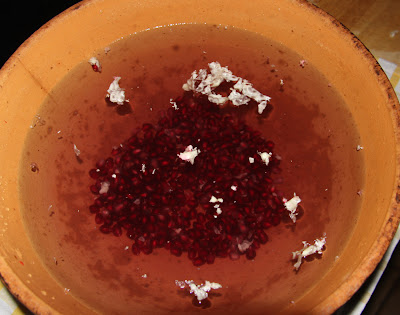 Remove bigger parts by hand and pour away most of the water with the white bits. Before you throw away the seeds with your water, however, use a strainer: 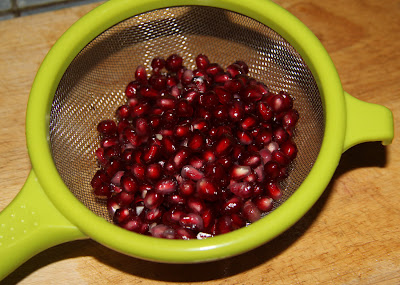 Now you have clean, unscathed, and beautiful pomegranade seeds which are super healthy and delicious.

Now that everything is prepared, we can have a look at the ingredients: 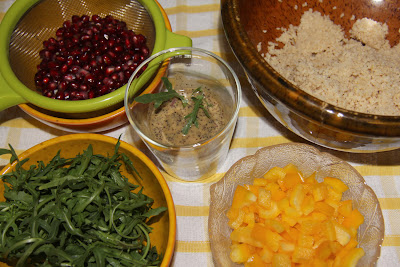 Combine them in a bowl: 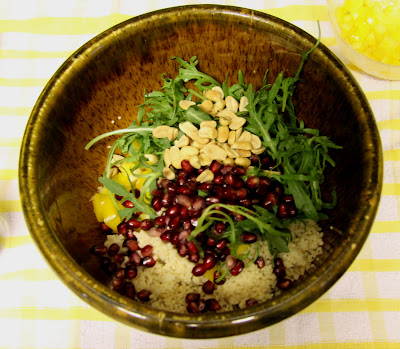 Now add the poppy-seed dressing from above and sprinkle with some poppy-seeds: 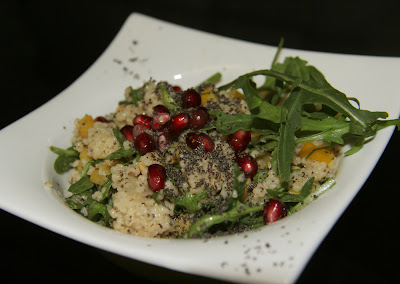 1 cup prepared couscous
half of a yellow bell pepper, diced
2 handful of rocket
half a cup of pomegranate seeds
2 tablespoons of peanuts (if you use salten ones be cautious with the salt, you may need none at all)
1 portion of poppy-seed dressing (see above for recipe)

Not much, mix everything gently together. Done :)


And, since this is a lazy recipe and I'm lazy during summer time, the salad also goes to a much beloved event which I (due to laziness I guess) do not frequent as much as I want should. I'm talking about Deb's Souper Sundays at Kahakai Kitchen. This event will not only accept soups for a Sunday round-up but also salads and sandwiches. Therefore I'm also sending this salad to Kahakai Kitchen. Hope you like it, Deb  :)

Kanji of the Day